1. It's all over. Christmas and New Year that is...as if you didn't know, and I'm going to come right out and say it, I'm a teensy bit relieved. Proving that you really CAN have too a good thing... or in my case lots and lots of good things - mince pies, wine, more wine, more mince pies. I never thought I'd say it, but I'm just all socialized out. I don't want to see a Quality Street EVER again.... and as for TV, I've had it up to here with Christmas specials and New year round ups. I've had an entire series of  'The Good Wife' clogging up my sky + since October, and how can I possibly get near it when 'Seven Brides for Seven Brothers' (Bless their beautiful hides), is on?


2. Speaking of TV, January traditionally  means a new series of 'Celebrity Big Brother', which I had FULLY intended to rise above, but then I took a quick peek, just to see which chumps were mad enough to go in this time, you understand, and wouldn't you know it, there was Claire from 'Steps' so I had to watch on. I totally fell in love with her in 'Steps The Reunion' last year and I  know that we'd be BFFs if we ever actually met-its just a Tragedy we haven't-geddit?


3. The kids are still off school which is something of a mixed blessing. Yes, there's no homeworks or after school activities but there's an awful lot of bickering and playing the Wii and watching crap on TV. 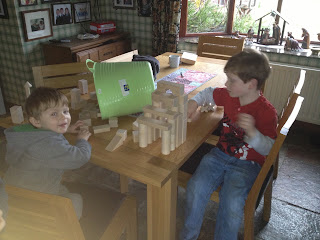 This is despite my daily ritual of turfing them all outside one by one, ('Theres no such thing as bored-get out and get some fresh air!')  and reintroducing them to their old friends Lego, blocks and  dinosaurs ('Nope, not even 5 more minutes-it's unplugged for the night so here you go!'). Roll on Monday...for all of us! 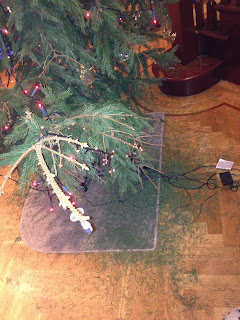 4.  We took the tree down the other day. My dad had better not be reading this, because at home it's considered a sin, most likely mortal, to take the tree down before the Epiphany on 6th January... but the truth is, I just couldn't stick the needle drop anymore. I mean they were EVERYWHERE! Under the piano, on the stairs, on and under the rug, in my knickers (okay I made that one up, but you get the picture.) A certain person who shall remain nameless, ( initials LB), decided that our Griswald tree didn't need any water at all  for the entire three weeks it spent in our overly warm centrally heated hall. No indeed, despite age old wisdom stating otherwise, apparently that's just a theory invented to over complicate the business of tree erection and maintenance. Well, it certainly led to a few 'lively discussions' around here but  it's a moot point now, because treewise, I'll be faking it from here on in- in fact, I may even go for shocking pink, who knows!

5.  I finally made it into 'The Irish News' on New Years Day at long bloody last. Despite a horrid picture of me, and the fact that I was interviewed TWO MONTHS before, I was hugely relieved that I hadn't actually dreamt the entire thing after all. 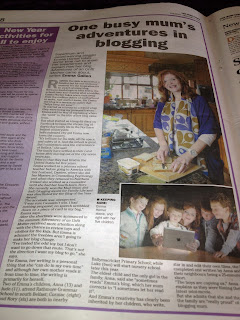 6. l leave you with our remote controlled Fart Box- every home should have one.....No, not really.  What was I Santa thinking, because honestly,  it's turning out to be the gift that keeps on giving and the joke that never gets old! 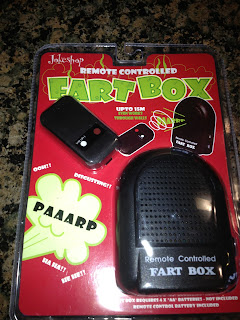 The wonderful irony is that with four boys, ( five if you  include their father), it's completely superfluous anyway, because 'farting at will' appears to be their God given talent. I am truly blessed. Happy Friday my loveliesxxx
Posted by Emma at 16:40