Buzz Lightyear to the Rescue 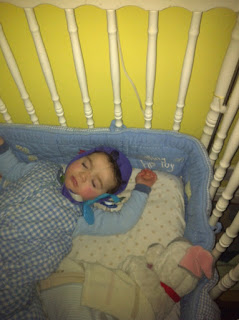 Just thought I'd share this little pic of my adorable godson Senan. But what's with that funky purple headgear? For the record, he happens to be sporting the authentic Buzz Lightyear 'helmet' (and of course, parents of toddlers and /or major Toy Story fans will have already clocked this.)

And no, Senan's not wearing it because he's such a massive Buzz fan that he can't bear to be parted from his intergalactic attire, even in the Land of Nod.  No this is, in fact, a last ditch attempt by his Mummy, my sister Mary, to prevent her two year old from becoming prematurely bald.

She recently noticed that he appeared to be thinning on top at a alarmingly early age, so Mary frantically searched for, and quickly found the reason. It appeared that Senan enjoyed the novel, if slightly manky method of soothing himself to sleep, by systematically rubbing his dummy through his hair- hence the bald patch. And yes, he does then follow that up with a good old suck on the now hairy pacifier.

Pretty disgusting it must be said, although actually  on the Toddler Scale of  Horrible Habits (TSHH), I'd probably only rank it a 6 because there's much worse out there, people! (Remind me to share with you sometime what my good buddy's potty training three year old liked to do with his talking Buzz. All I'll say is that it involved lots of poo.)

Anyway, back to Senan's baldy thatch- it's discovery immediately forced decisive action on Mary's part, so she and her husband Barry braced themselves and made the enormously brave, (though perhaps somewhat foolhardy), choice to go cold turkey, and remove the dummy completely.......Well, let's just admit right now that the next few days were somewhat challenging....for all concerned.


Poor old Senan didn't know what had hit him- overnight he had lost not only the conventional soothing of the dummy, but also his head rubbing / hair thinning tool as well. So he cried, he screamed, he sobbed, he wept, he begged, he whimpered, he pined and all the while his little eyes were filled with bewildered hurt, clueless as to why his beloved dummy had been so cruelly wrenched from his him.

To be fair, Mary had done her best to help him understand. They'd even gone as far as to seal all his dummies into a big envelope and post them in the (actual) postbox to 'The Sick Babies in Hospital'. (Yeah, as if! Believe me, those hairy soothers were proper minging), but Senan bought it......until bed time anyway and then all hell broke loose. Days of weeping and gnashing of teeth followed and finally a solution was sought ....a compromise that would please everyone- the return of a happy, settled toddler without the increasing  risk of resembling Dr Phil. 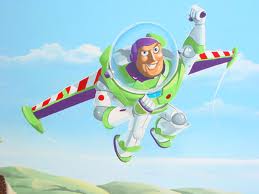 Although a hat or cap seemed obvious enough, it had to be close fitting, and most crucially, difficult for Senan to pull off during the night. A swimming cap was briefly considered, but Buzz's helmet had the advantage of fitting under the chin AND was an easier sell to a two year old.
Not overly keen at first, once he realised it was a no helmet/ no dummy deal, he was more than happy to suit up. That night he was asleep in two minutes flat, and peace reigned in the household once more. I'd say it was definitely a case of 'Buzz Lightyear to the Rescue!', wouldn't you?  (I was just DYING to say that!)