1. Now, I know you've been on the edge of your seat wondering how potty training has been progressing around here, so I'll put you out of your misery...it hasn't.
After a stressful few days, (me, not him), when every floor in the house was piddled upon (and worse), I made the executive decision to put further training on hold until the New Year.
Oh yes indeed, although perfectly content to SIT on his Rolls Royce of potties, (the one with the spongy seat that looks like a proper toilet- VERY comfortable..I tried it), when nature called, he would just wander off  and do his business elsewhere. Usually on the carpet, as luck would have it.
I did all the right things - read him 'potty' books, bought him big boy pants in bright colours, and promised 'special treats' for success. He actually grasped the theory part easily, and would happily parrot it back to me, but when push came to shove, he clearly just wasn't ready to put his money where his mouth was. (I'm mixing my metaphors now but you know what I mean!) So, it's bye- bye big boy pants for a little while longer!  *breathes huge sigh of relief*

2.  I was rummaging through my tardis of a handbag the other day, and amidst the usual debris of nappies, wipes, phone, raisins, toy cars etc,  I discovered a slice of toasted wheaten bread, completely intact. The embarrassing, and slightly worrying truth is that I have no idea how, or even when, it got  there... Now I'm thinking, I'm not even sure I want to know!

3. Speaking of toy cars, (I know it's tenuous, but run with it), we've had to draw a line when it comes to Rory, and the impressive stash of them, he's been smuggling efficiently into Mass on Sunday.
When the kids are very young I DO bring a selection  of distractions like books, toy cars, food, dummy, alcohol (I'm joking!), to just 'get through' that hour without a meltdown. (Theirs and mine). And I'll be honest with you, sometimes we've managed to pull it off, other times it's been the old walk of shame back down the church.
Anyway, Rory will be seven in January, so it's high time he was participating instead of playing, but he still likes to amuse himself with the odd toy or book that we've brought for Luke. And we've sort of turned a blind eye, except that of recent weeks, he's obviously decided to ramp it up a bit.
For instance, as Mass began two weeks ago, I watched in amazement as he removed from his coat pocket, a car transporter with it's full complement of 6 cars. Last week, it was his toy plane, a mc Donald's toy and three dump trucks. This week, there's nothing else for it... he's getting frisked before we go. 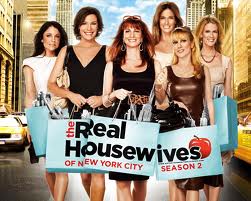 4.  Finally,  I've got a confession to make and it ain't pretty. I'm completely and utterly addicted to 'The Real Housewives of New York'. (And while we're on the subject, I also peruse Orange County, New Jersey and Beverly Hills).
I don't know how this happened.  I tuned in once to simply shake my head at the cut of them, and the next thing I know, I'm sky plus-ing the entire series, and googling the outcome of Jill and Betthany's long term feud.
I can't help myself.... and thankfully I know now that I'm not alone, as a few friends have murmured quietly that they too are hooked. It's been a tremendous relief to realize its not just me ... and to then be able to share a detailed analysis of Alex and Simon's weird relationship.
Take my advice when it comes to RHNYC - just say no!
Happy Friday, and have a lovely weekend my lovelies, Emxxx
Posted by Emma at 13:22