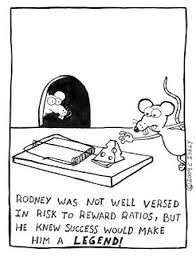 On Sunday morning we caught a mouse in a trap under the kitchen sink. And by we, of course I don't actually mean me- I was far too busy standing on a chair screaming Tom and Jerry stylee. The little fecker got his leg caught in a trap, and then proceeded to drag the trap underneath the kitchen cupboard, where he squeaked and wriggled and created such a distraction, it put Cormac right off his breakfast. Which absolutely never happens.
The only way for us, ( NOT me-as if!), to get at him, was to take the plinth off the front of the cupboard and suck the horrid creature AND the trap out with the Hoover. Obviously Himself then did what any normal person would do-he threw the whole lot into my mop bucket, got out the camera and took plenty of photos.
After which, I naturally assumed we, (I COULD have done this bit), would bash him squarely over the head with a brick, but instead Loverboy made the rash decision to release him from the trap, whereupon the fecker ran off back into the field, as fast as his gammy leg could carry him.
Now, can you just imagine the story he told his mates? He'll be eating out on it  for the rest of his life for goodness sake  - he'll probably write a book, sell the movie rights-  he's on the pig's back! (metaphorically speaking)
God, I HATE mice and it happens every Autumn-our house is surrounded by fields, which in turn are jam packed with mice. Combine that with the chill in the air, the warmth of the kitchen and the kids leaving the back door open ALL THE TIME, and we may as well just issue an open house to the entire mouse population of Glenavy.
Then, on top of that, this morning I got a text, (A text! I ask you!), from Anna's school to say that headlice had been discovered in her year group, and it advised me to check my child's hair. Well, my blood just ran cold right there because, much as I loathe mice, I'm undoubtedly on the OCD spectrum when it comes to headlice. Thankfully, we haven't had them for a number of years *touches wood repeatedly* but just the thought of them makes me shudder.
It brings me right back to Christmas Day 2005 (Christmas DAY, FTLOG!) We had just moved out to the country, (major stress),  I was 9 months pregnant with Rory (even more stress), and I was getting the older three ready to go visit relations, before hosting dinner for 16, (stress +++).   Then I found the lice AND with them my tipping point, and that was that. Christmas was immediately cancelled and the entire day was instead spent fine combing, delousing and weeping. It was horrendous, and it probably didn't help that we'd also had mice the week before, so I was ready for the hills.
The time prior to that, was in 2001 when we were living in America. Anna was two and Jude was 8 weeks old.  We were all due to fly home later that day for his Christening, when I  discovered, to my utter horror that Anna's ginger curls were walking....and so the wheels began to come off.
First,  I rushed to the supermarket for the special delousing shampoo for her, but then I panicked about whether or not I should treat Jude as well, even though, in hindsight, he was entirely bald. But in that skewed moment,  it seemed perfectly reasonable to me to phone the 1800 LICE number on the back of the bottle and implore the poor woman on the other end for advice.  And although I'm fairly certain she was well trained on the side effects and treatment times of her product, she was woefully unprepared for the oversharing, sleep deprived, Irish madwoman on the other end of the phone, crying about colic and flights and newborns and  feeds, oh, and headlice. Not my finest hour, and as you can imagine it's all left me with a bit of a phobia in that department.
Truthfully,  I 'm MILITANT about Anna wearing her hair up in school, I switch channels if the headlice ads come on the TV,  and I literally cannot look at  pictures of a magnified louse without feeling sick. But needs must ...I've got that text from the school, so  I HAVE to do a check later whether I like it or not...and just talking about it now makes me want to scratch...Ugh!
What about you?  If you HAD to pick-  Mice or lice- what would it be? Go on, choose your poison...
Posted by Emma at 11:27