Monday Club ....in a midweek sort of way!


I'm late for the Monday club, as it's actually now Wednesday, but never mind, I'll be fashionably late and hope they won't notice. What's the craic since I last tuned in?

Wellllll, we had our weekend in Donegal, which was unfortunately a wee bit of a washout. Which isn't so  terribly unusual for Donegal, but irritating because, by all accounts, the rest of the North of Ireland had a perfectly bright crisp Autumn weekend.  Couldn't have been nicer apparently, or so the texts informed me as we looked out at the driving rain and bickered.

I'm telling you, I don't know how the travelling community do it with their big families, and in a touring caravan too! At the very least, they must be world champions at Trivial Pursuit, but I don't mind telling you, my head would be turned. I'd be putting down a deposit on a nice chalet bungalow before you could say 'chemical toilet'.

For us part time caravilla dwellers though, the moral of the story is quite obvious, (so obvious, in fact, that I don't know why we didn't think of it before)-we must remember to check the weather forecast before we go. Genius.  Our next visit in a few weeks is the last of this season-we'll be closing her up for the Winter, (thanks so much for all the tips by the way), and keeping our fingers and toes crossed that the mildew gremlins will stay away.

What else is going on? Well, look away now if you're of a delicate disposition, but I've got a most  impressive abscess in my mouth. It looks like a nasty ulcer but it's more sinister than that, because it's hiding a load of infection in my gum, and jeopardising a few lower teeth in the process. Very luckily for me, one of my BFF's is an oral surgeon, and so yesterday I had an appointment with a colleague of her's for a consultation.

Now I don't know about you, but if at all possible, I try to ensure that any male doctors or dentists I see are....how shall I put this?...fairly unattractive. Downright ugly is even better. You can call me vain or contrary, and yes, I know they're professionals and see these things all the time and are well used to it, blah blah blah, but  if it makes you feel any better at all,  I don't actually SHARE my quirky preference with them.
So, when Dishy Dentist walked in, all dark haired and beardy, as if made to order, my heart sank just a little bit. I was flustered anyway, given the monstrosity on my gum, and what with being in a surgery with needles and stainless steel, so this development didn't help.

On climbing into the chair, I first managed to whack my elbow so hard and noisily off his instrument tray, he seemed quite concerned that I may have injured myself. But it was later, when he had the delightful task of lancing and squeezing the aforementioned enormous gum zit, and then releasing all the horrible yellow pus and then hoovering it up, that I felt the last of my dignity ebb away. I took small comfort in the fact that, unlike a previous dentist, he didn't then sniff the pus appreciatively, expertly pinpointing its exact vintage... but still, it was a personal low point.

And it looks like I've lots more similar dental fun, (that's an oxymoron surely) to look forward to. Surgery and implants have been mentioned ( in the teeth sense, obviously!), but I'm not going there in my head just yet-I'm still working through yesterday's trauma, if you must know.
The only little silver lining of it all, was that I DIDN'T have to start an antibiotic which would've meant that I couldn't have had a few drinks on Saturday night with friends, so it definitely could've been worse.

(To be honest, I always assumed that the old 'antibiotic' excuse on nights out was just the universally recognized code for 'I'm pregnant but it's too early on to tell you.. stand by for an announcement' scenario.  I've certainly used it a few times myself over the years, so I'm very relieved that I now don't  have to spend Saturday night completely sober AND convincing my tipsy chums that, no, number 6 isn't on the way!) 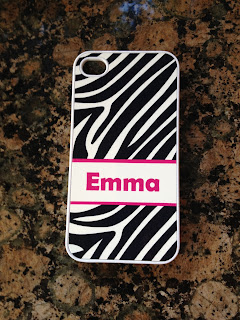 Other breaking news? I got a new phone cover for my iPhone. Loverboy rolled his eyes to the heavens when he saw it, but I just love it...I  know, I know it's  the opposite of classy and probably entirely too young for me, but I can't help myself. Why, oh why, am I ever drawn to such tack? I'm exactly like a magpie... Or a five year old....if it's animal print, sparkly or even better has my name on it, then I'm sooooo there.

It's an affiction, and sadly worsening over time. In fact,  my (incredibly unattractive) doctor recently informed me that its now so severe, that  inevitably by the time I hit eighty, I'll be resplendant in leopard print lounge wear, clutching a sparkly wand and wearing a tiara. Bring it on, I told him, bring it on!
Till next time, loveliesxxxx


I've joined up with the fab Sarah Miles at Hello Wall for the Monday Club-if you fancy it, you can take a peek at the others over there too!
Posted by Emma at 12:43