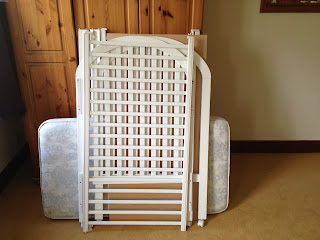 Do you know what this? Of course you do-it's a picture of a dismantled cot about to be packed away into the roof space. It's just that for me, it's about to be packed away for the very last time.
This sturdy trusty cot has served us well over the years- it started off it's life in America in 1999 (where it's actually called a crib), and then travelled all the way home across the Atlantic in a container, with the rest of our wordly possessions.
Anna was its first occupant, and then each of the boys, one by one, down to Luke. Only recently, after a room reshuffle, he's moved into a 'big boys' bunk bed with Rory-it just made sense and it was time, and I didn't really think about it until I walked past the cot sitting on the landing, and realized what it actually meant.
And I think it might be fair to say that it feels a little bittersweet. Because you see, I'm very glad and grateful for the healthy, big family that we have, and we're excited and ready to move ahead into the next phase and all the adventures that may bring. The thing is, it also feels a little daunting, as new things often do, and I suppose that I feel like I'm packing away a little of my identity too. Let's face it, there's been a little person in that cot, in our house, for the last thirteen years......it's the end of an era!
Over the last year or so, I've gradually given most of my baby stuff away to family without a backward glance....but there's a few things, like my old fashioned SilverCross pram, and this cot that I'm holding on to. Because some day..... a very very very long time ahead, and maybe if we're really lucky, there may even be grand kid or two who'll come along and make themselves comfortable in it.
Posted by Emma at 08:58