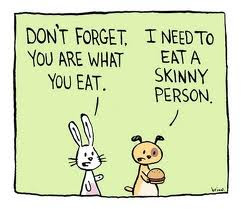 I stood on the scales last week. I hate standing on scales. I've hated it my entire life because the number that's on there, almost never tells me something I want to hear. So standing on, and facing that number squarely in the eye, has generally meant the start of yet another diet. And I REALLY hate diets... just about as much as I hate the scales.
A few years ago, I decided to go a different way and actually listen to my body's needs- radical eh!? I'd done a lot of reading about mindful eating .....which is basically just relearning how to eat like a normal person, or at least the way a normal person should eat.
Eating what you want, eating when you're hungry, stopping when you're satisfied, not grazing, and hopefully, leaving all the good food/ bad food ideas behind in the process. The theory is, that as babies, we do this instinctively, but it was so very alien to me, I wonder if I ever knew how to do it at all!
It SOUNDS straightforward, but after years of training myself to eat according to the diet du jour, I'd lost touch with my own body and it's natural wants and needs. It's also bloody difficult, because it often feels like I'm swimming against the tide of our diet and image obsessed culture. Where every media outlet screams of the latest diet, and flagging careers are revitalized with a 3 stone weight loss double spread. It's depressing.
But at last, I felt that I was on the right track for ME, and more importantly, it led to a gradual self acceptance, and a growing confidence in my own food choices. And for the last few years, my weight has stayed stable. Not much of an achievement for most people, I realise, but pretty darn major for me.
That was until last week, when I stood on the scale for the first time since June and saw 8lbs on. I mean, I knew I'd put on a bit, but 8 frickin' lbs! Clearly, the weeknight glasses of wine at the caravilla, and the accompanying Marksies crisps and dips had taken their toll, but to be honest, it knocked me into a bit of a tailspin. I think I panicked, that I was somehow on a slippery slope back to the bad old days, and it made me doubt myself and this approach to eating and food that I've worked so hard on.
Magazines dispensing weight loss tips, other people's diet successes and advice - before I knew it, I was making plans for no carbs and juicing, and feeling more and more down in the process.
Because all of that feels like a step back for me. At the first sign of trouble, I was ready to put all my trust in ANYONE except myself. I had to tell myself that EVERYONE puts on weight sometimes, and it doesn't mean that I've failed completely- I just have to keep doing the very thing I've been trying so hard to do... trust ME.
So yes it's true, maybe a few bad habits have crept in, and maybe it IS time to revisit the mindful eating principles, but I can do this on my own. I WANT to do this on my own. And hopefully, gradually, that 8lbs will go... and maybe a bit more besides. What I don't want, to put my life on hold in the process, which I've always done to a greater or lesser degree, with every single diet I've ever been on. I'm choosing long term tweaks over short term fixes, which will (hopefully!) lead to lasting results. That's the theory anyway. Wish me luck!
Posted by Emma at 17:36