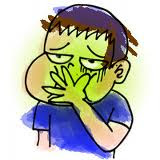 We had a Code Vom in our house last night. A pitiful, white faced Cormac came into our bedroom about 11 o'clock, having just upchucked the 2 large bowls of chilli he ate for dinner, all over his bed. Bright orange chilli on clean, white sheets...kidney beans were in abundance... a fish slice was utilised.... don't even ask. Unbelievably though, even amid such a graphic scene, his pyjamas remained unscathed.
The episode reminded me of one of the first posts that I ever wrote. It was about another code Vom last summer, which coincidentally, also involved Cormac. It's called 'Scooping up Vomit with a Spoon' and here it is....

Having five children means many birthday parties, in-house and elsewhere, which also means multiple opportunities for overindulging in cake, sweets and the like. The older three boys, in particular, will often enjoy unlimited quantities, (read-greedy!), and occasionally this results in feeling, and subsequently being sick later in the evening. When real illness is also factored in, this means there are numerous 'opportunities' in any given year for me to hone my vomit cleaning skills. I've seen it all in my time- war zone type scenarios (I'm going in-cover me!), involving walls, curtains, carpets and sheets (mentioning no names-J!), head to toe full immersion including, but not limited to, hair, ears, eyes etc, baby style projectile vomit and any combination in between. There aren't many things in this life that I'm an expert in, but let me tell you , I am second to none in this field. (What a winning addition to my CV-'Fully proficient and experienced in all aspects of the vomit sanitation process').
Yesterday was Anna's 12th birthday, and after a busy full day at the park, we had a barbeque followed by icecream with sweets and chocolate sauce followed by large slices of chocolate cake. Cormac, in particular enjoyed the aforementioned chocolate cake.....and there's your clue!
At about 11pm, as I was FINALLY sitting down reading the paper, I heard a pitiful little 'Mammy!' Now, there are many times one might hear this during the course of an evening-a request for water, another story, an extra cuddle but I knew this was none of the above and I took off up the stairs as fast as I could (Code VOM!!!). Poor Cormac was sitting up in bed, holding his stomach , and before I could do anything, he leaned forward ,over the edge of the bed and produced a perfect cow pat of puke on the floor.
(Sidenote- This is typical Cormac-he's my naturally neat boy, the only one who can get two days out of his clothes, the only one who doesn't end up with long streaks of tomato ketchup or yogurt down his front on a regular basis. He would never turn a full 360 mid puke, spraying everything and anything in sight, (still no names-J!).)
Apart from a tiny bit on the quilt, it was completely contained in that one area-not even touching his pyjamas. In other words, pretty much a best case scenario, second only to making it to the porcelain. After quickly assessing the situation, I got to work. First was dealing with Cormac. When the process is a 2 parent job, as it usually is, one seamlessly deals with child sanitation, the other with room sanitation. I was flying solo last night, but thankfully, because of Cormac's considerate barfing technique, once he was set up with a basin in front of him and a glass of water beside him, I was able to crack on with the room clean up.
Step 1 involved scooping up the vomit with a large spoon. Can I just say at this point that there are few things that ground one more than being on your hands and knees, spooning vomit into a plastic bag? ( I attempted to banish any self pity by considering how the situation could be worsened- If it were three o'clock in the morning this would be worse, if I had a hangover this would be MUCH worse, if it were three o'clock in the morning AND I had a hangover..and so on.) Next, I attacked the offending area with hot soapy water followed by liberal amounts of Febreze. A few minutes later, Cormac was tucked up in a fresh bed in a vomit free room and I'm not ashamed to admit that I had a more than a small amount of satisfaction for a job well done. Sad but true-Ask any Vomit Sanitation Specialist.
Posted by Emma at 08:46