Alec Baldwin...It was all going so well.

I've always had a real soft spot for Alec Baldwin. I stuck with him through the Kim Basinger years, overlooked the fact that they called their only child 'Ireland', and even when THAT phonecall became public, I was there for him.

Years later, when he starred in 'Its Complicated' with Meryl Streep, with a few more years on the clock and a few more pounds on the scale, (haven't we all), I actually found him MORE attractive!
I saw him once you know. Indeed, Loverboy does a realistic impression of the incident after he's had a few drinks. It was in Manhattan, six or seven years ago, and Alec just walked right past me as I was chatting to my mum on a pay phone. Apparently, I just dropped the phone and began to just repeat, 'Oh My God, That's Alec Baldwin!' louder and louder until myself and a similarly deranged stranger were jumping up and screaming it in each others faces. Meanwhile, the man himself was somewhat alarmed and hotfooting it away down the street as fast as possible. Come back Baby, we could be beautiful together!!

Then, last week 'Hello' magazine pops through my door, and who's on the front of it with his gorgeous new wife, only Alec Baldwin and he looks good. Too good. I'm talking botox, fillers and hair transplant good. 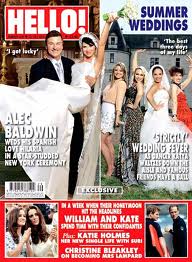 So I read on, and hasn't he only gone and dropped 30 lbs, and taken up yoga. And lo and behold, it all slides into place, when I read that his beautiful, new yoga -teacher wife, (wouldn't ya know!) at 28, is 26 years younger than our Alec. So that means, while he was busy making 'The Hunt for Red October', she was busy being born. They must have SO much to talk about.

Oh Alec, Alec, did you have to be such a walking, talking mid life cliche? Now, I'm not suggesting he goes to seed, and of course, a healthy weight is important, but of all people, I thought HE'D grow old gracefully. A real man with a bit of meat and body hair and a cheeky smile? Not a yoga obsessive, with a forehead as smooth as a baby's bum.

And to top it all off, it turns out that the new Mrs Baldwin, is actually called 'Hilaria'. Seriously though- Hilaria?? I mean, would you EVER be done taking the piss out of that? Would it EVER get old? I think not. Ms Basinger must be having a field day. Absolutely Hilaria darling!
Posted by Emma at 14:57