Soooooo, after our fruitless reconnaissance visit to Donegal last Tuesday with the boys, a follow up was hastily organized for Friday, this time just the two of us. Weather wise, it could not have been worse-the rain was coming down in sheets, there were flash flood warnings everywhere and my hair was completely flat. I did wonder if we were mad, but I told myself that if we STILL love Donegal under these conditions, then we're doing the right thing. The plan was we'd lift the three older boys after Sports Day, drop them & the bambino to my mum's and get on the road as early as possible. Easy Peasy. Only of course it wasn't.
First of all, unsurprisingly, Sports Day was cancelled because of the rain, so we set off to drive the 20 miles to my mum's later than we'd hope. Halfway there, and it hit me that crucially I'd forgotten to pack Luke's blankie. The very same blankie that Loverboy once drove 50 miles at midnight to retrieve on another occasion. So, knowing instantly what had to be done, without a word he turned the car back in the direction of home.
Thirty minutes later, with Blankie safely on board, we were back on the road, when I suddenly became aware of Rory jigging frantically up & down in the backseat. This could mean only one thing- we had a high alert Code Red Toilet Emergency on our hands and I knew it was bad when he didn't even try to deny it. 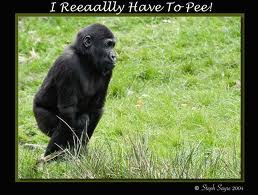 Now, normally this isn't a big deal- with four boys, we've made these unscheduled bio breaks numerous times, fertilising many a hedge in the process, but with rain bouncing off the road and windscreen wipers at full tilt, it was a most uninviting prospect for all concerned.
'He can't get out in that, he'll be drenched through...and I'll be drenched too!'
'If he stays in here, he'll be drenched anyway, and so will the seats and there's no way on earth I'm driving to Donegal in a car stinking of pee!'
Nodding in agreement, we were just about to opt for the lesser of two evils, when Rory, understandably put off with the idea of relieving himself in torrential rain, insisted he could hold it. The twisted expression and ongoing rocking may have indicated otherwise, but I told Loverboy to put the boot down and we immediately initiated a distraction campaign of relentless joke telling and songs, which worked for a good 10 miles at least. But a mile or so from my mum's, it became abundantly clear that Rory and his bladder had reached tipping point, and the only solution now was an emergency stop and immediate evacuation. The problem was we were outside a service station, in a built up area, without a hedge in sight.
No time to discuss- outta the car, down the alleyway, baby wipes in hand, and the job was done as I called aiming instructions from the sidelines-
'Down the drain, Rory, down the drain, son. No, mind the shoes! MIND THE SHOES!'
Eventually though, we made it to my mum's, swiftly deposited the children, and headed for Donegal at last in a pee free car.....it's the little things. Just a few hours later, we'd done the deal and we're now the proud new owners of a mobile home from home with central heating, double glazing and en suite- honestly, if Carlsberg did mobile homes, my lovelies! We spent that night in a cosy little hotel, drinking wine, making plans and dreamin' dreams, and thankfully when we stood on the beach the next day in the rain, we DID still love it.....Who knows, at this rate, I may even get a fleece!
Posted by Emma at 15:30