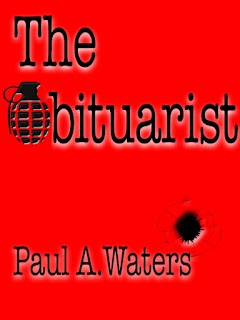 I'm taking a brief intermission from my usual nonsense, to tell you about a short book  that I devoured recently. On my kindle. (Or, as it happens, on the kindle app on my iPad...yep, STILL loving it!). Anyway, the novella is called 'The Obituarist', and it's written by Paul A. Waters.
It tells the story of a journalist, who's stuck with writing the obituaries of various suits and Z list celebrities, until an old war hero dies, and he quickly seizes the opportunity to make a name for himself. Then strangely, another veteran dies...and  another...and I can't tell you anymore or else I'll spoil it! I will say though, that it's packed with handlebar mustaches, hyphenated surnames, greed, treachery and death and that the ending is totally unexpected. It reminded me a little of Agatha Christie, but with a darker, more modern tone. I thought that MakinMovies.net hit the nail on the head when they described it as, "Mordant, funny, dark, teasing and ironic.”
It's the perfect beach read, although I actually read it in the hairdresser's, and found it infinitely more satisfying than the usual three month old 'Closer'. Once I started it, I just couldn't put it down, (except briefly when I was getting my hair rinsed). And the best part? It costs only £1.95 and is available from Amazon here. That's less than  a cup of coffee!
Oh, and if anyone wants the author's autograph, I can make that happen, my friends, because he's actually my cousin. He's a journalist, broadcaster and writer, (although he doesn't write obituaries, as far as I know.) He does write a blog though, so go on over and say hello, and tell him what you think of his book.


I MAY have mentioned this before ;-) but I'm a finalist in two categories in the MAD Blog Awards. If you're feeling any love at all for this wee blog, I'd really appreciate it if you could vote for me in the Family Life category (the other one is decided by judges). Here's the link- http://www.the-mads.com/vote.htm and thank you very much xxxx
PS While you're there, check out the other finalists-who'd have believed there were so many amazing blogs out there?
Posted by Emma at 14:43