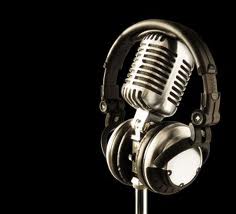 Oh goodness me- I hardly know where to start! What a difference a week makes!! This time last week, I'd only just heard about being a finalist in the MADs and now, I've got three radio interviews and two newspaper articles under my belt! (Did I really just write that?) I've honestly been  lovin' it all too, that is when I'm not bricking myself and thinking of  the fifty easy ways that I could put my foot in my mouth! I suppose that's the thing about being the age I am now though, (30 with 10 years experience), because even though there was a massive part of me that was really nervous, the other more mature part thought, 'Really, what have I got to lose? This isn't life or death, and the world's not going to end if I mess it this up. , I've pushed out five humans, and if  flippin' Jedward can do the Eurovision (twice!), then surely to God I can do this!
What really amazed a media virgin like myself, is how quickly these things get organized. I mean, it started off like any ordinary old Tuesday, (Have you made your bed? Go and do it. Is your lunch packed? Put it in now.), but little did I know I was going to be on Radio Ulster Arts Extra with Marie Louise Muir later that evening. (I'm glad I didn't know actually- it just would've given me more time to obsess about it).
It's funny though, how you're just programmed to think like a mummy- the producer rang about lunchtime and asked me to come in for 620pm  and I hesitated, because my immediate thought was ' No, no, that's not going to work-it's bang in the middle of dinner time and home works' but thankfully Loverboy was busy nodding furiously at me and mouthing 'Say yes!' so I did. |Then, because he was coming with me, we dropped the kids off at my (super excited ) parents' house. I got my pep talk from my mum as I was leaving, 'Now, listen here. Don't you go in there and run yourself down! You're as good as the rest of them, d'you hear me? Or even better. You go in there and be confident...and don't talk too fast...and speak out clearly.'
And it wasn't just them. After texting and tweeting and facebooking my news, I got so many messages from friends and family saying Go for it! We're listening! You can do this!  Not just here in Norn Iron either- Virginia, New York, California, UAE -isn't Internet radio great altogether? I was embarrassed and delighted, humbled and moved all at once-all those folks who took the time to cheer me on and wish me well, when they could so easily not have bothered-it was overwhelming..
The show was half a hour long and I was on right at the end, so Loverboy and I sat in with the producers, looking into the studio where Marie Louise Muir was on air-she had a proper red light and everything! (I'd love one of those at home, but no one would pay one bit o' heed.) There was a lady author called Jo Baker doing a phone interview  before me-her book 'The Undertow' is  Oprah's book of the week! Yes indeed, as in THE Oprah! Whose newsletter only goes out to 1.6 MILLION people! I mean I'm thrilled for her, I really am, but all I could think was, me and my poxy wee blog is up after an interview with Oprah's NBF! No pressure then. But before I went in, a lovely producer called Ruth advised me to just pretend it was me and Marie Louise having a wee chat...and that's exactly what I did.  ML made it seem easy, so I relaxed and  it was over! My sister, (who was listening in my parents') told me later that despite 3 radios on in the full and busy kitchen , my mum furtively took one into the utility room  so that she could listen without any 'distractions'. (read-children).Then, when she came out, she said very seriously 'I thought that was FANTASTIC!' ( which was clearly an overstatement, but she's my mum, and I love that she still does that for me, even now).
Before we picked up the kids, we grabbed a pizza and a glass of wine and my phone beeped the whole time and I was on an absolute high! Then it was up to collect Duffy's Circus, who were beside themselves at hearing mummy on the radio.. and fairly bemused as to why, but hey, we're eating icecream in Nanas' on a Tuesday night, so who's complaining? Driving home, I honestly thought that was that, but as it turned out, my five minutes wasn't quite up and Wednesday was set to be even busier..... To be continued...(Oh, I've always wanted to write that!)
Posted by Emma at 15:53