Dress it up, dress it down!

Well here, it looks like I'm definitely off to London in September for these MAD Blog awards...to a fancy schmancy hotel in Bloomsbury, if you don't mind, where I'll be quaffing (free!) cocktails and hobnobbing away with the other finalists. Yep, it's a dirty job.....
There WAS an initial question mark over whether I could go or not-Oh, the drama of it- one minute, I didn't even know there WAS an awards ceremony, and the next there was the nail biting possibility of a clash with my sister's wedding! (Which obviously I'd never DREAM of missing... and anyway, all of my babysitting options are guests!) Crisis averted though, as it turns out they're 2 weeks apart. Phew! (I just KNOW you were on the edge of your seat there.) 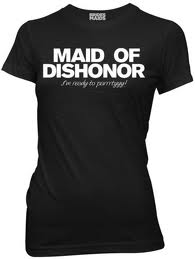 This meant, that I was then able to tie down my (ever accommodating ) Ma & Da for babysitting duties, so now we're completely sorted....in that department anyway. I mean we've still to book our Sleazy Jet flights, (where I'll definitely learn from my mortifying Exeter experience and book the extra bag)... And then, there's the MAJOR issue of what to wear. Yes indeedy, it may be 4 months away, and I probably SHOULD be worrying about giving good blog between now and then, and/or selling my soul/body for votes, (as there can be no doubt that I'm the long shot), but no, right now, for me, it's all about the dress.. Or dresses to be exact...because that wedding that I mentioned before? Yours truly is a bridesmaid, or more accurately-a 'matron of honour'.
Jude unwittingly fueled my anxieties about this when he asked me yesterday, 'Mummy, are bridesmaids not usually about the same age as the bride?' Ouch! Loverboy snorted with laughter, because, it's true, I am twelve years older that my sister.... and four sizes bigger. My other sister (who's just the ten years younger), is also a bridesmaid....or is she? You see, we won't actually know for sure until the day itself, as her second baby is due two days later. And even if she is there, I (shamelessly) can't rely on her to make me look better, because she's one of those annoyingly skinny pregnant people, who just have a perfectly proportioned melon of a belly. (Unlike me, who was blessed each time, not only with the belly, but the arse, thighs and a great big pregnant moon face as well!) Oh, and our lovely twelve year old Anna is a 'mini' bridesmaid. (Yes, that IS her actual title, so she's the yin to my yang, if you will. The Happy Meal, to my Big Mac, so to speak)
I've a confession to make-at my own wedding all those years ago, there was a guest there, (I'm not telling you which side!), who was wearing a flouncy, floral number, and my good friend Kim leaned over and whispered in my ear, 'Who's the ancient bridesmaid?' and then we both sniggered evilly. I mean this lady must have been all of, oh I don't know, mid forties? Roll on 16 years, and this is surely bad bridesmaid karma back to bite me up the arse. Who's the ancient bridesmaid now, mwah, ha, ha ha!
And the other dress? Well, I MAY get a new one but I'm seriously considering a new little number I recently wore to my sister in laws wedding - a lovely silk, Anna Scholz wrap dress. The only issue here, (according to my mother), is that it's too revealing in the chest area. In fact, she helpfully told me that I needed a modesty panel. (No, I didn't know either.) Now, obviously I took this with a huge tablespoonful of salt, as she's a well known anti cleavage militant, and any lingering doubts disappeared when Loverboy unequivocally assured me it was grand altogether, But then later, I WAS a trifle disconcerted when an old, sozzled sleazer, (there simply would be no barge pole long enough), saw me with Luke on my hip and complimented me with "I'm sure that wee fella doesn't go hungry with those puppies!" I mean who SAYS these things? Who even THINKS them?
I wanted to give him one of my renowned withering looks but he wasn't actually looking at my face, so I just stomped off in a huff. The long and the short of it is... I haven't decided. On the one hand, I may not ever get such a wonderful excuse to buy a new dress ever again...but then again, a modesty panel may be just the ticket. I just need to find out what it is first- Mr Google will know....

PS- I would REALLY appreciate it if you would vote for me in the MADs, and maybe this long shot might be in with a chance!?... It's dead easy, closing date is June 6th and there's a button on the right that takes you straight there. I'm up in two categories-Blog of the Year and Family Life  (but you only vote for Family Life) and I literally will love you forever!
While you're there, do take a look at the other finalists -77 cracking blogs in 20 different categories-I'm working my way around them all and loving it!
Posted by Emma at 15:57