Soooo, on to part two of my 'Night with the Stars'.... Alright, alright- I may be over egging it a bit but as my good friend Aine quite rightly reminded me on Twitter, 'T'was far from a 4 course meal and Van Morrison you were reared. (pronounced 'rared') (This is my excuse for subsequent behaviour!)
After the meal, and before old grumpy Van came on, there was the usual stampede for the loos. As I was en route, I noticed an Indian looking girl at another table, and for a second was SURE that I knew her, but then quickly realised that No, I didn't actually. So, my very next thought was 'Eastenders!', but as I filed through all the characters in my head, I knew that wasn't right either. Then, as I was standing there wracking my brains, in she came to the loos with another girl, (more on that later), and caught my eye and smiled. (Or actually with hindsight it may have been the other way round). But brave with wine I said,
'I'm sorry to bother you, but where do I know you from?', and she said,
' Well I'm actually in a show called 'The Good Wife'.
There followed the briefest of pauses as my penny dropped, and then off I gushed,
'Oh my goodness, I LOVE that show!! You're Kalinda, aren't you?' And then worse...what next popped into my head and proceeded unfiltered straight out my mouth was,
'So is Mr Big as gorgeous in real life as he is on TV?'
Seriously Emma, seriously? What age am I-fourteen? AND it's the wrong show anyway- she probably thought I didn't even know or care what I was watching as long as HE was in it. But to her credit, despite my tragic faux pas she laughed charmingly, and said that, yes, indeed he was. (But then again, what else COULD she say?) So, obviously at this juncture you'd assume that I would have slipped quietly back into my seat and oblivion, right? Wrong- I was only warming up....
Kalinda aka Archie Panjabi then went in for a pee, and I turned to the vaguely familiar girl who came in with her, and cosily confided,
' Gosh, I DO hope your friend didn't mind me asking her where I knew her from? I mean she just looked SO familiar you know? '
Now, not only must she have been mildly taken aback by my overly chummy tone- I was a mere breath away from borrowing her lippie- but much more insulting, was that she'd seen me go into freaky fan mode  with her mate, but I clearly had no idea who SHE was... Until I was back in my seat and DIED with embarrassment as I realized it was Bronagh Gallagher, of 'The Commitments', Pulp Fiction', Sherlock Holmes, Star Wars etc etc fame.
Later on, and egged on by  Loverboy, (do it for the blog, go on sure, go on!), I got a picture with the beautiful Archie, who was really lovely and told me that this was her first time in Belfast and she couldn't get over how friendly and welcoming everyone was.
The next morning, quite by chance, (honestly!), we got chatting to Bronagh Gallagher after breakfast, and she couldn't have been nicer - she clearly didn't hold Loo- Gate against me -and told us all about her band- with the fitting (if slightly predictable) name of  'The Bronagh Gallagher Band'- and how they've just released their second album and are playing in the Limelight in a few weeks time. Check her out on www.bronaghgallagher.com Oh, and I got a picture with her too....the excitement of it all! 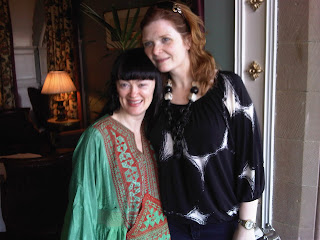 Disclaimer-Unfortunately for me, like most actresses these ladies are teeny TINY but alongside moi, it's like freakin Land of the Giants. Worse, when I looked at the pic of Archie and myself , all I could think was Petite Exotic Beauty and........Supersize Orphan Annie. FTLOG, (For the love of God) what was I thinking wearing a red top AND curling my hair?
Posted by Emma at 18:19