You may possibly have guessed, that I was feeling a touch insecure after those Mother's Day themed homeworks last week. There was most definitely a bit of the 'What the hell am I doing I'm obviously the worst mother in the world all they see are ginger eyebrows just shoot me now' thinking going on. You see, most of the time I don't overanalyse parenting toooo much, because I've found that when I do I tend to freak out, just a little bit. The overwhelming responsibility of it all, the stuff I get wrong every day, the endless bad things that could happen...Then, at that point and quite unhelpfully the immortal poetry of Phillip Larkin usually springs to mind. You know, that poem you'll NEVER find quoted in any parenting text?
'They fuck you up your mum and dad.
They may not mean to, but they do.
They fill you with the faults they had
And add some extra, just for you.'
I mean, honestly, what if he's right? And if he is, it's probably too late for me anyway, the damage has already been done.. Thankfully, I realise that there's really nothing to be gained from this train of thought so I pull it back from the brink as best I can, expertly distracting myself with an online M&S sale or a really good caramel square.
There are also those great  times as a mother, when the stars align and it all comes together- basking in the glow of a really good Parent Teacher meeting for instance, or watching with pride as the art of wiping one's own bum is mastered at last. Let the good times roll! These key moments, these metaphorical high fives, are then carefully tucked away to serve as reassurance for the rainy days when I'm wracked with frustration, exhaustion, impatience or self doubt.
Which brings me neatly to last week and those homeworks- never was the sentiment 'If I didn't laugh, I'd cry' more apt. So, to say that I was anticipating the P2 'Mothers day' celebration slightly more than usual is an understatement. It involves poetry, song and cupcakes and has reduced me to tears more than once in the past. (The sentiments, not the cupcakes obviously, although they're pretty spectacular too). Then, the day before, Rory complained of a sore tummy, but I felt his head, calpoled him and packed him off to school. Towards the end of the day though, I got a call to say that he was feeling unwell (cue guilt!) and to come and get him. Later at home, tucked up, re-calpoled and sleeping, the grim thought flitted across my mind, 'If he's off tomorrow, you'll miss the Mother's Day gig'. And as it happened, he WAS off the next day-almost better but not quite-and I'm not proud that despite this, I still shamelessly tried to 'encourage' him to accompany me to the one o'clock soirée 'Just for the songs? You can wear your jammies. There'll be cupcakes?' When that failed, I then briefly considered leaving him with Loverboy while I went myself. I mean honestly, can you even imagine?
'Where's Rory?'
'Oh, I left him at home sick, but clearly I'm so needy I came by myself. Cupcakes you say?' 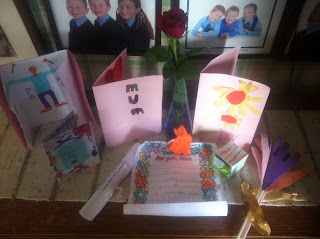 So despite my pathetic efforts, we quite rightly missed it this year but there'll  be other Mothers' Day celebrations, other challenging Mothers' Day homeworks, and hopefully a few high five moments in there as well. Speaking of which, today I got homemade cards, cardboard flowers, a painted clay bunny, a bracelet and a poem that puts Phillip Larkin in the shade. Oh, and lots of hugs and kisses. And at this moment, I'm watching my five offspring play together in the garden, it's a beautiful spring day, and Loverboy is catering to to my every whim. I feel overwhelmingly blessed. Who needs cupcakes anyway? High five!
Posted by Emma at 13:09