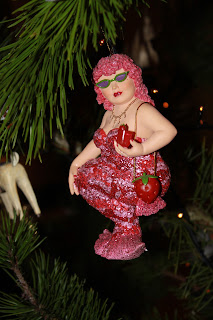 It happened somewhere between the home made wooden peg reindeer and the blousy, margarita quaffing mermaid....that teensy glimmer of a Christmas sparkle. Last week, putting up the tree, had been for me just one more chore on a very long list. For the children, however, it was pure magic. So,on Friday evening, in an effort to reclaim that festive feeling, Handel's Messiah was on the stereo, and Loverboy had poured me a large glass of wine. The stockings, the crib, even the annoying, singing Tigger Santa were unearthed from their crumpled wrapping, with delighted enthusiasm. The new, knitted nativity scene took pride of place on the hall table and red lights twinkled above the kitchen window. The wreath was hung on the front door and the 'Santa Stop Here' sign placed outside, in clear view of any passing sleighs. Little Luke, too young to remember last Christmas, was beside himself with excitement at the sight of a tree in the hall. He ran around in dizzy circles shouting 'Wassat? Wassat?', until he simply  fell over, and then just sat there quietly, eyes wide, staring up at it. 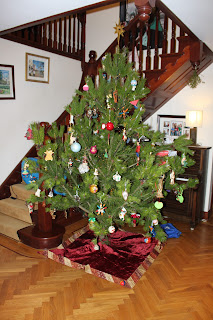 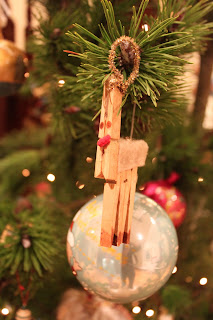 Regrettably, for me, 'fake it till you make it' was the order of the day. I had one distracted eye on the increasing mess, the other on the couch that I actually hoped to sit on later. Trying to make the appropriate excited noises, while organizing everyone and everything around me, I wondered when I started focusing on the housework, and stopped noticing the sparkling lights and the shining eyes. Did I unknowingly trade in my Christmas mojo with responsibility upgrades? Or was it with the advancing years on the clock? And could I have a refund please?
Finally, it was time to hang the decorations- I've collected them since we got married and this has long been my favourite part. But somehow I'd forgotten. Each decoration is a memory, a story to tell, and quite unexpectedly, as I unwrapped them, those ghosts of Christmas' past whispered to me and I felt a wee bit of magic sneak back into my tarnished old grinch heart. There was the little embroidered heart we got on Walton's mountain in West Virginia, and the little lace one from the Amish country. Another from North Carolina, a mini Lady Liberty from New York and a beautiful glass blown one from Bermuda. There were the ones that family had brought me from Australia, South Africa,, Germany and California. Then there were all of the ' Baby's First Christmas' ones - those precious times and memories, liberally peppered with exhaustion. Most special of all, there were the little homemade creations with the year and child's name recorded on the back, the reindeer crafted from wooden pegs, the Christmas trees from lolly pop sticks, and the stars from sparkly pipe cleaners.
As I surveyed the tree, after the children had gone to bed, the lower half overcrowded with sparkles, the upper half almost bare, I experienced a real sense of peace. I also felt deep relief knowing that it hadn't been lost to cynicism, and if you look for it, your Christmas mojo can come out to play again. Although, I do think that as you get older, it's probably tinged with sadness-the haunting memories of good times past, the pain of loved ones gone. But maybe with that there comes a deeper appreciation? Because life's definitely not perfect, nor is Christmas, but we're all still here to feel and live and love, sometimes with that mojo, sometimes without, and maybe, at the end of the day, that's what it's all about?
Posted by Emma at 19:31