We're at the end of another year- 2011 lies behind us, 2012 is waiting to start. It's traditionally a time for New Year's resolutions and I've personally made the same unsuccessful ones dozens of times over the years. They're all an unimaginative variation on the same theme, inevitably born out of the guilt and tightening waistband of an overindulgent December. The 'I'm DEFINITELY going to lose a stone/ go to the gym 3 times a week/ stop drinking wine because I'm a big fat shite' variety. Very negative, very depressing and pretty much guaranteed to fail by January 11th...at the latest. 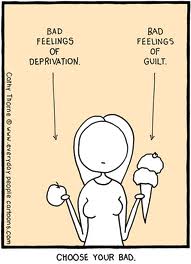 So, after my increasingly reckless December foodfest, instead of greeting the New Year with anticipation, I greeted it with dread. My only new beginning involved becoming a cottage cheese and crisp bread eating hermit and of course,the ads on tv don't help. Apparently, Weight-watchers is spending £15 million on a 3 minute ad to be aired on all the major channels on New Year's Day. Never mind Slimming World, Lighter Life and the rest!! What chance do we guilty greedy suckers have in the face of that??
It's not that I'm a totally changed woman- like most people, I still eat and drink more than is good for me in December, although perhaps not as wantonly as before because I now know that the tap isn't suddenly switched off come New Year's day. I also actually believe that after the excesses and festivities of December, our bodies naturally crave simpler foods as normal routine kicks in again.
If I'm totally honest, I do hate the fact that my waistband digs in a little tighter in January, and my gut reaction,('scuse the pun)is to sign up for another diet that THIS time will  work for me. But I'm not going to because I've been here too many times before. Most of the time, I now know that what works for me is listening to my body, as it asks for simpler wholesome foods when it's hungry, and not because another tin of Quality Street has winked at me from the back of the cupboard. And slowly, gradually as a cold bleak January wears on, and because I'm not going half crazy with diets and calories and the resulting weekend blow outs, I'll start to feel more comfortable in my clothes and in myself. That's the theory.
Some might say that I'm just not motivated or determined enough. Or that I'm too fond of the dreaded carbs, or that I just haven't found the right diet. Maybe they're right! Perhaps I have lowered my expectations...Or maybe, just maybe, I've raised them?
Posted by Emma at 00:48