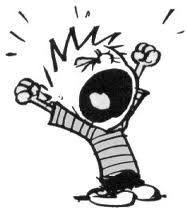 It's the longest hour of the entire week. I inevitably emerge frazzled and stressed. Every time, I vow it's the last time, but fast forward a week and there I am, living through the infuriating experience all over again. Mass - I KNOW it's not meant to be like this. It's a time of prayer and peace. A time to feel renewed and sustained, refreshed in one's faith. At the very least, a time to sit in silence with one's own thoughts.
Well, that would be in a parallel universe to mine because currently, it's the polar opposite of all that- it's an endless endurance test that stretches my nerves to infinity and beyond! Forget Bush Tucker Trials, Fatima Whitbread wouldn't stand a chance going head to head with my toddler at Mass on Sunday.
I'm no novice, mind. I arrive prepared with my bag of tricks, all carefully selected for their ability to quietly distract. They're produced from my handbag as 'needed'- an increase in the noise and/or wriggling levels, cues a frantic rummage through the bottomless pit of my bag, in the desperate hope of buying a few extra minutes of relative silence. I usually make it to the Gospel, (less than halfway through the Mass), before my threshold is reached, and we move into Phase 2, as I do the walk of shame down the church with the squirming offender under my arm.
Mass and Toddlers are like oil and water- they just don't mix. And therein lies the problem-he's 19 months old and it's all about him, him him. Normally, I don't have an issue with saying no to him when I have to- I simply brace myself for the impending tantrum. Sometimes, I even find that I'm quite entertained by his oft spectcular rage against the machine ... in the privacy of our own home. For although there's nothing quite as dramatic, raw, and blessedly transient as a toddler tantrum, they should be to be avoided at all costs during Mass.
Meanwhile, down the back of the church and free of the confines of my knee, my mini dictator wants to roam. My job now, is to monitor and restrict that roaming as required, while utilizing counter tactics such as food or his dummy to keep noise to a minimum. He's quite the social butterfly, approaching strangers for a 'chat' or just to eyeball them for a lingering moment before moving on. The 'audience' love it- he works those back stalls  like a pro. A little Pavlovian dog, he associates the sound of a handbag unzipping, and the subsequent rustling as a precursor to food, so when the little old ladies reach for their purses as the basket is passed around, he scuttles over to them in anticipation. It's like walking a tightrope, allowing him enough freedom to keep him quiet, but not so much that he's an intrusive distraction to others' prayers.
Yesterday, he bloodymindedly manhandled a doll from a little girl, (with 3 older brothers, I don't think he'd seen one before), and then to her distress proceeded to use it as a cushion. As I whispered my apologies to her mother, and whipped it out from under him, he opened his mouth and let out a blood curdling scream...regrettably at the most sacred part of the Mass. Her mother, thankfully reading the situation, hastily shoved it back to him, thus shutting him up. Indeed, this was fortunate for me, because Phase 3 entails immediate evacuation to outside the church, (there's no porch), and it was pouring rain.
So why do I put myself through it week after week? I have barely a prayerful thought and feel indecently relieved when it's over at last. Is it a pointless exercise? Maybe, but I don't think so. We've been here before, you see, four times actually, and so I'm able to murmur 'this too shall pass' under my breath and know it to be true. I look to my older four children in the seat, all well behaved as a rule, and foresee a time when five shall sit peacefully and I might even get to say a prayer. Our little man, given time, will be able to sit for longer periods, imitating his siblings, gradually assimilating appropriate behaviours, simply because he is present week after week. It seems unlikely now, but I KNOW it'll happen, and in the meantime, I cling to the belief that just my being there in body is enough for now. There'll be time for the spirit part later. I'm going to finish now by snaffling the Serenity prayer which I think should be renamed,
'A Prayer for all the Long Suffering Parents of Toddlers'.
God grant me the serenity to accept the things I cannot change, courage to change the things I can, and the wisdom to know the difference.
Amen to that!
Posted by Emma at 13:31