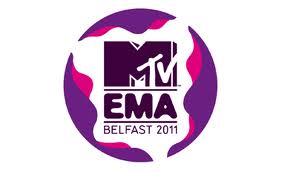 The MTV awards are live from Belfast tonight! Now there's a sentence I never imagined I'd write. Little old Belfast- hosting one of the biggest global music awards..it's incredible! The stars have been flying in over the last few days. Jay Z was spotted doing a bit of retail in Victoria Square, Justin (I'm not the daddy!) Beiber and Selina Gomez sneaked out the side door in George Best Airport, throngs of teenage girls are parked outside the Europa Hotel, and Snow Patrol are doing sound checks round the corner from my mum and dad- it's mental!  That little topless episode in a County Down field last month has been completely eclipsed- Rhianna who?
I think that for those of us who have grown up in this city, during the bad old days, it's testimony to how far we've come. During my teenage years, very few big stars came to Belfast -it was the nineties (ok, that's a blatant lie- it was actually the eighties-but what's a decade between friends?) and the height of the Troubles. The Odyssey Arena hadn't even been dreamed of, and the Kings Hall, (which held only about 3000 people), was the venue of choice. Meanwhile, I was deeply in love with George Michael and Wham and would have DIED to have seen them live....but they never came. AHA did though, and we swooned in unison over an impossibly handsome Morten Harket. Belfast was an appreciative audience too- we were so pathetically grateful that big stars would risk life and limb to come over to war torn Belfast and entertain us. Never mind that we had to live and work and grow up and grow old here. It was how it was.
I felt like we'd got the shitty end of the Irish stick, and I remember wishing that I'd been born 100 miles down the road in Dublin instead. It was so much more definitively Irish- there was a flag and a national anthem with no political agenda, and everybody knew the Hail Mary in Gaelic. In comparison, Belfast was run down  and troubled and divided and no one EVER came here on their holidays.
For me, change happened gradually. We lived on the East Coast USA for five years, and on our trips back I began to realise that there was more than just family calling us home. The very fabric of the place, that I had always been vaguely ashamed of was in my DNA, and over time I watched with pride, as this tough little city began to undergo something much more meaningful than a mere makeover. Even today, I have that deep sense of home every time I drive down Black Mountain and see the city laid below me- you can take the girl outta Belfast but you can't take Belfast outta the girl, I suppose..
So that's why tonight's awards are pretty amazingly wonderful for Belfast and for me! If I were twenty years younger, I'd be off to hear Snow Patrol performing at the City Hall, then hanging around the Merchant Hotel, hoping for a glimpse of a few stars at the after show parties. As it is though, I'll sit on the comfy sofa in our kitchen, and watch along with millions around the world, and when they say the words 'Live from Belfast' there'll be nobody prouder and more tickled pink than me.
Posted by Emma at 08:23