A Fierce Battle of Wills 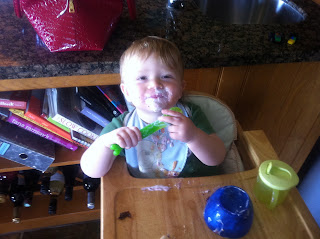 Last night, at dinner time, and again today at lunchtime, I went head to head in a battle of wills with eighteen month old Luke. As a young baby, he ate everything- lasagne, shepherd's pie, chicken, potatoes and gravy- basically he happily ate the puréed or mashed version of the family meal. But gradually, and in part as a result of endless teething and colds, he has become more fussy and his diet has narrowed to milk, cereal, banana, raisins, yogurt, and ham and cheese toasties. Oh, and anything sweet obviously! He refuses point blank to even try anything else. If he could flick me the bird, I know that he would. As it is, he just looks at me with a withering look that clearly says, 'You don't REALLY expect me to eat that s**t, do you?' Well, yes actually, I do.
It's partly my own fault- as he has become more selective, it's been easier for me to just give him what I know he'll eat. Spend 5 minutes mashing and cooling a meal, to have handfuls of it flung at you, and the rest scraped into the bin anyway, or just make the bloody toastie? So, yes, without meaning to, I've been helpfully enabling his ever more limited food choices.
But last night I'd had enough-the worry that he's not getting a varied enough diet, coupled with the knowledge that I'm being completely manipulated by a one year old, motivated me to take action. The meal followed the usual pattern-I did my 'Bon appetit!' thing, he did his ' No way Jose!' thing and then he waited patiently for me to play ball and produce the toastie. When this didn't happen, and then clocking his older siblings enjoying a yogurt after their meals, all hell broke lose. He screamed, he wailed, he cried, he hiccuped...but I didn't give in. It was desperately hard, especially with those pitiful little eyes begging me to give him what he wanted, but I kept telling myself it was for the greater good - blah blah blah. He didn't budge, I didn't budge and then he sulkily drank his bottle and went to bed.
This morning, after a hearty breakfast, (and with no snacks mid morning  to maximise appetite), he enthusiastically clambered into his high chair for lunch, doubtlessly anticipating his usual vittles. His reaction, on realising that he was being re-served last night's rejected fare provoked unbridled fury. Suddenly, in the midst of those outraged screams, and as I watched handfuls of roast chicken dinner landing in messy splats on the tiles, I had a moment of clarity- the clear truth that this just wasn't worth it! Why was I making life more difficult for all of us? For myself and Luke certainly, but also for the rest of the family, who had to endure these futile ear splitting face offs.
I know that as he gets older his palate will naturally develop, and that he'll also learn and understand discipline a little better. In the meantime though, he won't starve and if not forced, he may even be inclined to be more adventurous with food . I'm not advocating that a toddler rules the roost, nor abandoning important discipline, but it is so important to choose your battles, and this was one that I was destined to lose. Five kids later and it's still a learning curve.
So what did I do? Well, I cleaned up the floor and made him his toastie of course. And as he smiled serenely up at me, tears all dried and happily munching on his sandwich, I'm almost certain the wee rascal gave me a big wink. I may have lost this battle but rest assured, Master Luke, at some stage, I know I'll win the war!
Posted by Emma at 17:33