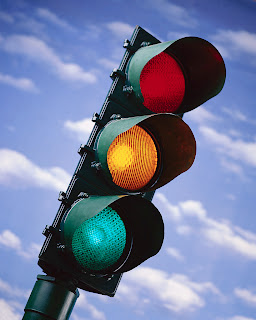 My 'American Dreams' post last week got me thinking about dual meanings to common words and expressions I encountered while living there. Sharing a language, there was no difficulty in being understood, and the Irish accent was definitely a welcomed novelty, (even a Belfast one!). That said, there are some cultural linguistic differences, and what follows is a 'heads up' on a few avoidable pitfalls. I've divided them into 3 categories based on their embarrassment / insult potential.
1. Green- go right ahead.
This is the safest category. Have no fear of making mistakes- you'll be warmly corrected if necessary and no offense will be taken. For instance, a diaper is a nappy, trash is rubbish, and a trashcan is a bin. Fries are chips, chips on the other hand are crisps, (there is no such thing as crisps), and a sidewalk is a footpath. A purse is a handbag and a wallet is a purse and a backyard is a garden. All good so far.
A torch is a flash or flashlight. Years ago, as a student working on the NJ boardwalk, following a power cut,  I enquired about the location of the torches. This caused much amusement, conjuring up images of a medieval flaming stake -think 'Merlin' or 'Lost'.
For the record, no one talks about trousers- in a store ( not a shop) it would be like asking for a very old fashioned item of clothing like long johns or a girdle. Trousers are pants. It took a little getting used to, usually, when a well meaning stranger asked me where I bought my pants, or what precise colour they were.
Panties are ladies' pants. (This always sounded vaguely pervy to me but I'm not sure why.) Panties are NOT men's pants. You would DEFINITELY get funny looks if you went looking for men's panties. Men's pants are jockeys or boxers- no such thing as Y's, whips, keks, or monks. Does not translate.
2. Amber-Proceed with Caution
These words are a little more tricky in normal conversation but I'll jump right in.
A nipple IS a nipple BUT it's also a teat on a baby's bottle. This caused a great deal of confusion and sniggering during our parenting classes. There is no such word there as 'teat', but it sounds very similar to 'tit' (especially with the accent) and this, as here, is really quite offensive. I learned this quickly, from the shocked expression on a choir member's face, during an in depth discussion on the sizes and shapes of  teats.
An eraser is a rubber. A rubber is a condom. Tread very carefully here especially when talking to teachers or fellow parents- a rubber in your kid's pencil case is a little TOO progressive.
Finally, a bathroom is a toilet. Asking to use the toilet is at best common, and at worst offensive.. Like asking for the bog or even the shitter here- it's just not done.
3. Red- stop right now.
These are downright dangerous waters but also the most difficult to describe without being crude. However, my own mortifying experiences will not have been in vain if they serve as warnings.
*deep breath* To 'blow someone off' means to get rid of an unwanted, possibly irritating individual. It is not gender specific. So one might conceivably blow off an annoying conquest in a bar, or an over zealous salesperson. The first time I was asked casually by a neighbor 'Did you blow them off?' was in the context of several young male Jehovah's Witness' doing the rounds. Although initially dumbstruck, I quickly recovered, recognizing that as the neighbor was an elderly churchgoer, there had to be crossed wires somewhere. But it's certainly one to watch.
Finally, a fanny is a lady's posterior and a fanny pack is a bum bag - those little packs that go round your waist, very popular in the 80's. This caused much hilarity, again as a student in NJ, when we spotted a male orientated establishment, with a proprietor bearing the unlikely name of C.R. Fannies. I'm not proud of the fact, that photographs of us posing outside were taken for posterity, and proof of it's existence to those at home.

I hope that my unedited disclosure  in this post hasn't caused anyone offense- please feel free to share any of your own anecdotes below. It's for the greater good after all .....AND I'd love to hear them......
Posted by Emma at 14:13