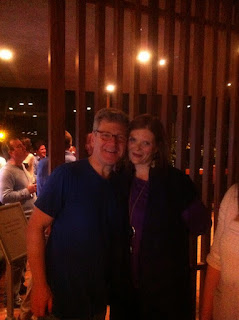 A few days ago, I discovered my cousin Paul's fabulous blog and forum http://blackwatertown.wordpress.com/  It's very clever, witty and intellectual- (not a bit like mine, but horses for courses, and all that). He has an ongoing section entitled 'The day I met....'  People have submitted all sorts of stories on there , including encounters with Gerry Adams and Telly Savalas, to name a few. Actually, I just submitted a little piece myself called 'The day my mum met James Nesbitt' and although this was bending the rules somewhat, it's posted AND I got myself a new book out of it! Result!
It got me thinking back on my own brief encounters with famous people- the list is short and the meetings fairly unexceptional, but I thought Id share anyway. ( Isn't that the beauty of having your own blog!?) Here it is in all it's unvarnished glory.
1. Frank Carson- I grew up with our Frank playing Buttons in the Grand Opera House Christmas panto, so when I spotted him crossing the road in Belfast, I was away after him like a whippet. The fact that I was a 19 year old student, and that Frank certainly wasn't cool, didn't dissuade one bit. My mortified friends hid out of sight, as Frank produced a colour photograph from his jacket and proceeded to sign it for me. ( In retrospect, how optimistically modest of him to have it handy!) The photo topped the mantelpiece in our student digs for a good while but then disappeared ...let's just say that I have my suspicions.
2. Hope from ThirtySomething- as a student, I spent a summer selling tickets for amusement rides in New Jersey. Standing in front of my booth one day, cash in hand, was none other than Hope from ThirtySomething. (For those of you not old enough, ThirtySomething was a popular American show- a sort of precursor to Friends except that everyone was, well ,thirty something. I still remember thinking how OLD they all were- ouch! )Hope was the dark haired one but to this day I dont know her real name-I really should google it. The encounter went something like this.
'Oh my goodness, You're Hope from ThirtySomething!'
'Yes I am.'
'Wow, I mean, you really are Hope from ThirtySomething!'
'I really am. Could I have $50 with of tickets please?' Dear oh dear.
3. Peter O'Toole in Shannon Airport in 1996- I actually stalked him and then lingered outside the men's toilets for an autograph. He had me clocked too- he eyed me pityingly for a moment outside the loos and said 'You know you can't come in here?' and I STILL waited till he came out. I know- tragic.
4. Alec Baldwin- he once passed me in a street in New York, and myself and a complete stranger went into hysterical fan mode instantly, screeching 'That's Alec Baldwin! That's Alec Baldwin!' at each other over and over. Mr Baldwin gave one frightened backward glance and then positively took to his heels down the street. Loverboy still laughs heartily at this even now.
5. James Nesbitt- he once massaged my shoulders from behind in a restaurant -swoon ! The fact that he thought I was someone else, and nearly died when I turned round, does not diminish it at all. Not one little bit.
6. Dara O'Briain gave me the eye. (This one is especially for my cousin Helen as we recently bonded over white wine and a shared weird crush on Mr O'B.) I was front row at a gig of his in Derry and am 85% certain he directed all his jokes, cheeky grins and winks at me. Loverboy, sitting on my left,completely disputes this and actually implied that he had a slight turn in his eye. I know differently.
7. Liam and Noel Gallagher- I didn't actually meet them but saw them up close in an airport- just as short, dour and ugly as you'd expect. Harsh but true.
8. Daniel O' Donnell - I received Holy Communion on Easter Sunday in close proximity to Daniel. No sign of Majella, I'm guessing she was hungover but that's pure speculation. It was a long way from Dungloe, Tenerife actually, and he had very smooth tanned skin. Personally I suspect fillers and Botox but again, could be wrong.
9. Drumroll please- Kenneth Branagh! Yes, only a few weeks ago, after his play with Rob Brydon in the Lyric and have photos to prove it (above). I MAY have had my arm snaked round his waist slightly longer than necessary and then unashamedly used my children as an excuse- 'My kids would KILL me if I didn't get a picture with Gilderoy Lockhart, giggle giggle.'. Did I really say that? Yes I did.
So there it is. I've dredged my memory and put my warts and all list out for all to see. Now I'm brazenly going to steal Paul's idea and ask for YOUR encounters. I know there are many and I want to hear them. I happen to know that Liam Neeson and Daniel Day Lewis may feature if we're lucky....
Posted by Emma at 14:51